The Formation of Caterpillar, Inc.

Prior to World War I, there were more than 200 manufacturers building track-type tractors, a new industry for America. Tractors were replacing horses and mules on farms and construction sites all over the country. In 1925, two prominent tractor manufacturers, C.L. Best Company, and Holt Manufacturing Company, merged to form Caterpillar, Inc. The new enterprise had just three products to sell: the 2-ton, Thirty, and Sixty tractors. Caterpillar established a good dealer organization and developed a dependable supply of parts and service readily available for the products sold. 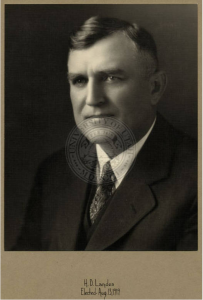 Herbert Landes began Landes Tractor & Equipment Co, the first Caterpillar dealership in the Intermountain West and Jesse Wheeler, a retired Studebaker dealer, came out of retirement to help him run the business. In 1929, Jesse’s son, J.K. Wheeler, joined the firm as a sales representative and sold Caterpillar products throughout the Intermountain West. The original dealership was located at 246 W. South Temple, in downtown Salt Lake City, Utah.

Landes sold out to Don Robinson in 1944, who then sold out to J.K. Wheeler and Walter Kershaw in 1951. Wheeler and Kershaw’s new corporation, the Wheeler-Kershaw Company was formed. J.K.’s son, Don Wheeler, began working in the shop and yard in 1947 while attending the University of Utah. After graduation and two years in the U.S. Air Force, Don Wheeler rejoined the firm in 1955 as a floor sales representative. In 1956, Lyle Campbell, also a graduate of the University of Utah, was hired as the administrative assistant to J.K. Wheeler.

Walter Kershaw sold his interest to J.K. Wheeler in 1957, and the company’s name was changed to Wheeler Machinery Co. Two years later, the company moved to a new and larger facility located at 300 West 2100 South in Salt Lake City, Utah. Wheeler conducted its business from this location for 21 years. In 1971, Don Wheeler and Lyle Campbell assumed leadership of the company, as J.K. was approaching retirement and acquired ownership control in 1981 after J.K.’s passing.

Don Wheeler and Lyle Campbell led Wheeler Machinery Co. competently for 25 years, during which time they built a legacy of service, integrity and stewardship while doubling the number of employees from 300 to 600. In 1980, as a result of company growth, Don and Lyle once again moved the company to a larger facility on 80 acres of land at 4901 West 2100 South Salt Lake City, Utah. Today, this state-of-the-art structure is still among the largest, most advanced equipment dealer facilities in the world.

Safety is one of Wheeler Machinery Co.’s Guiding Principles. In 2007, Wheeler hit a milestone of working 1-million hours without a lost-time accident, and it has done so multiple times since. Wheeler is currently the number one Cat Dealer in North America for safety. This achievement was made possible through the use of the TRACK safety awareness system: Think through the task, Recognize the hazards, Assess the risks, Control the hazards, Keep safety first in all tasks.

See how much you can save on select Cat® machine models when you use your exclusive LMN discount.

See how much you can save on select Cat® machine models when you use your exclusive USCC discount.

See how much you can save on select Cat® machine models when you use your exclusive FB discount.

Strictly Necessary Cookie should be enabled at all times so that we can save your preferences for cookie settings.

If you disable this cookie, we will not be able to save your preferences. This means that every time you visit this website you will need to enable or disable cookies again.